In Admiration of Phô

My guess is that any college student has eaten the kindergarten version of Phô, the savory Vietnamese soup rich in noodles, broth and veggies. We call it Ramen and it comes with a square of dried noodles and a foil package of flavored salt for the soup base.  At its most basic, that is phô. Now, I've discovered that this soup is adaptable in my ways, but still consists of the four basic elements, broth, noodles, protein and add-ons.

The recipe that I use for both beef and pork phô has beef bouillon at is the base; although I would prefer a homemade stock. Add a few spices and veggies and cook until savory. Remove the solids and reserve them for a stew later. They retain the flavor of the broth. The same process holds for chicken and veggie broths.

Using the precooked and dried noodles from the pack is easy. If you have a convenient oriental store, both dried and fresh noodles are available. While you can use any spaghetti or fettuccine style noodle, I think you'll find that the thinner, the better; meaning fettuccine or angel hair.

Preparation is key to a successful phô. Set your mise en place while your broth is simmering for thirty minutes. The add-ons are all individual choice. If you're having a phô dinner, have as many as you like on the table and let your guests pile them on as they wish. The list of possible add-ons is as long and varied as the 'side boys' for Royal Navy Curry (there are 24 of them). Favorites include jalapeño, celery, bean sprouts, scallion greens, bell  pepper, carrot, mushrooms and Thai Basil. Ensure that your protein is cooked, sliced, and ready, and your bowls are warmed and nearby.

Now, begins the fun. Bring the broth to a boil and drop in the noodles. They won't take long to cook, so don't walk away. When done, use a spaghetti scoop to portion them between diners. Drop the proteins in the simmering broth for a minute until warm. Remove with a spider or slotted spoon and portion, as well. Portion the broth, table up and pile on the add-ons. I like to keep them separate on the soup allowing each diner to select a bite of differing textures and flavors. 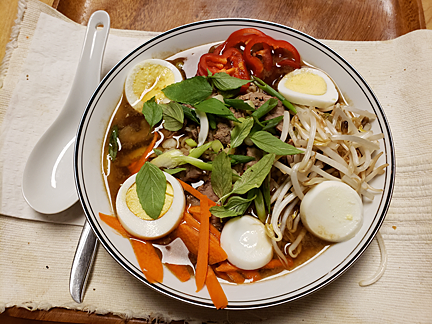 More posts from author
Sunday, 01 November 2020 A Simple Turn of Phrase
Tuesday, 01 September 2020 Janus - God of Endings and Beginnings
Friday, 17 July 2020 A change in the national bird is in order

No comments made yet. Be the first to submit a comment

By accepting you will be accessing a service provided by a third-party external to http://karlbogottwrites.com/